A Country Cottage or a Cabaret?

During a stroll around Montmartre I came across a curious house on the corner of Rue des Saules and Rue St Vincent facing Le Clos de Montmartre Vineyard. 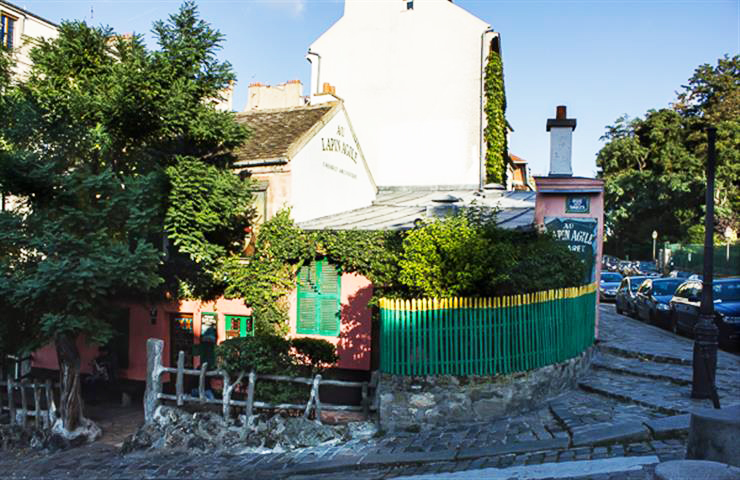 With its rickety wooden fence and salmon-pink walls the building looked more like a country cottage than a building in the centre of Paris. But my curiosity was piqued so I checked out the sign on a wall to one side.To my surprise, and delight, I discovered this was an historic cabaret –“chansons et poesie” it promised.

The history of this place proved fascinating. During the early years its name changed from questionable names such as  “Rendez-vous Des Voleurs” (translated means Thieves Meeting Place”) “Cabaret des Assassins” which probably says something about the calibre of the clientele back in the 19th century.

Around 1875 caricaturist, Andre Gill, painted a sign with a rabbit leaping out of a saucepan which was hung on the side of the building. The place became known as Le Lapin à Gill (Gill’s rabbit) which morphed into its current name Le Lapin Agile. 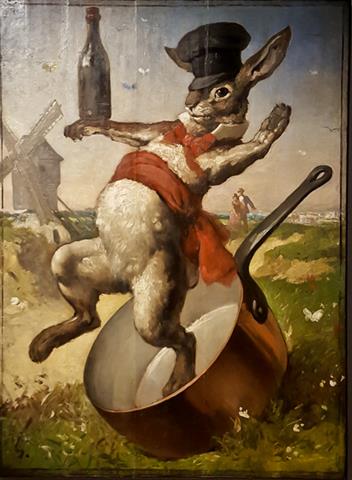 By the beginning of the 20th century the Lapin Agile was facing closure but rescue came in the shape of cabaret singer and comedian, Aristide Bruant. 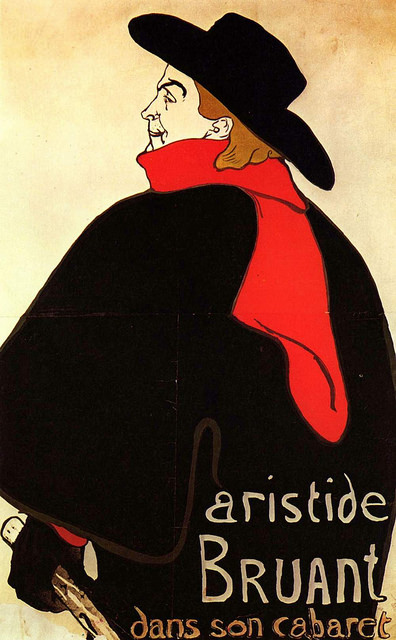 He bought the establishment and handed the tenancy to Frédéric Gerard, known to all as Frédé.

It became a great venue for budding musicians to make their debuts and also became a regular haunt for impoverished artists.

Picasso, Modigliani, Apollinaire and Utrillo would spend their evenings immersed in philosophical debate and music at the Lapin Agile.

Often Frédé would accept paintings from the artists in payment for their drinks. 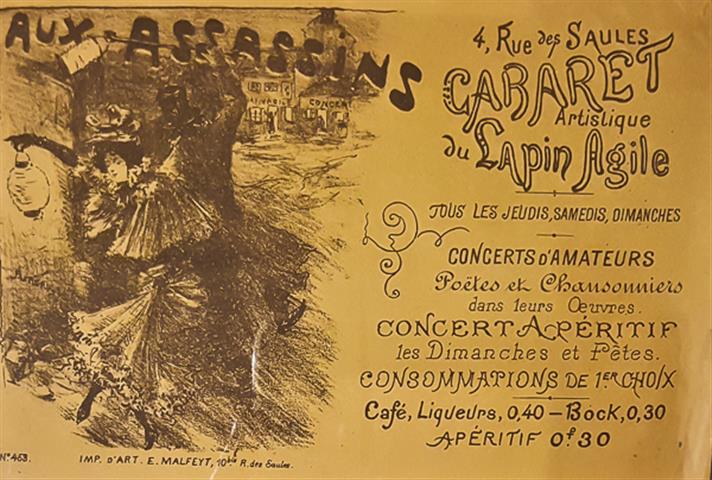 An Original Picasso Painting Sold For $20

Picasso gave Frédé one of his artworks called Au Lapin Agile which showed himself dressed up as a mannequin sitting in the cabaret next to a female customer with Frédé playing the guitar in the background. In 1912 Frédé sold the painting for $20. In 1989 it went to auction at Sothebys and sold for $41 million. 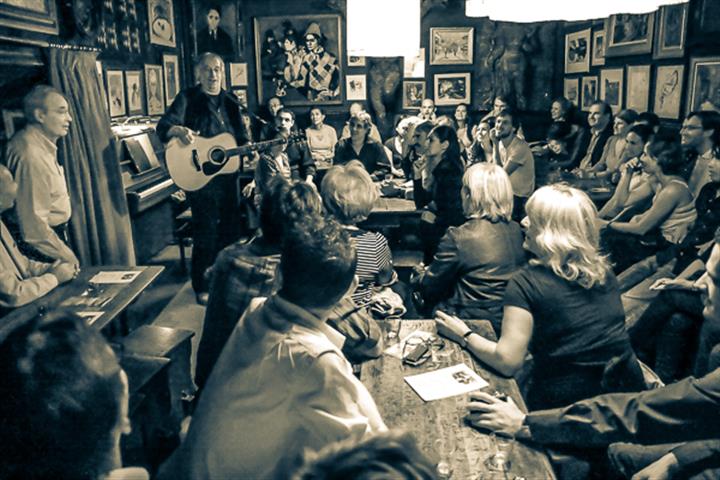 You can see a replica of Picasso’s painting on the far wall in these images of the interior of the cabaret. Otherwise you can go to the Metropolitan Museum of Art in New York to see the original.

Other famous patrons included Ernest Hemingway and Charlie Chaplin who would play his violin there. In more recent years American actor/comedian, Steve Martin, wrote a play called “Picasso at the Lapin Agile” about an imaginary meeting between Picasso and Einstein which was performed at several major theatres in USA.

An evening at the Lapin Agile was for me a truly memorable occasion. I’d imagined a Parisian cabaret would be about topless dancers, the cancan and loud music having years ago gone to the Lido on the Champs Elysées, so I was curious as to how they could pack all that into this little cottage.

The evening’s performance starts at nine pm but people can come and go when they want. As the cabaret had already begun by the time we arrived we were asked to wait in the entrance hall until the song had finished. Then we were shown into this dark cavern-like room with an eclectic collection of artworks covering the walls. Wooden tables were scattered around the room. We took our place and were given the standard drink of a glass containing cherries and fortified wine.

There were no dancers, or semi-naked women, instead a group of people having a good time singing mainly traditional French songs, the type you’d imagine Edith Piaf would sing if she were there. 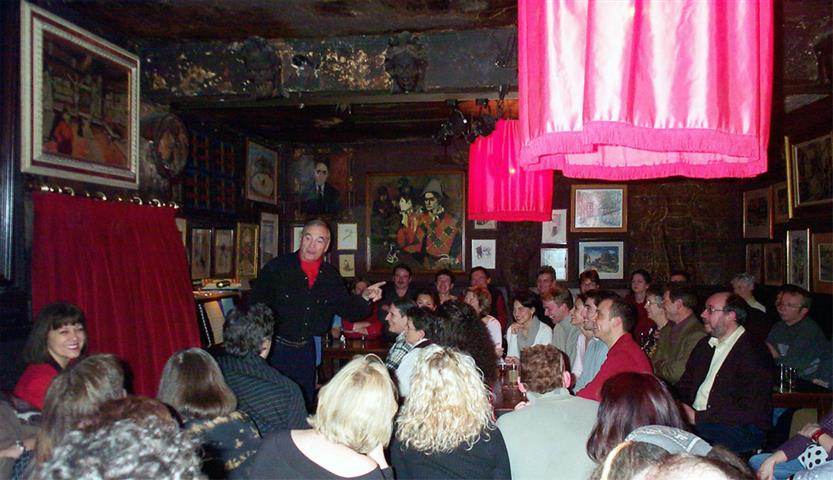 I couldn’t help noticing that a group sitting at one table seemed to be getting into the swing of things with more enthusiasm and confidence than the rest of us. Their strong voices could be heard way above everyone else’s and they knew all the words to the songs. It turned out these were the performers and as the night progressed they each had a “turn” to perform their own solo. The Lapin Agile has helped launch the career of many of its musicians.

Patrons came and went between acts. Eventually there was just myself, Peter my partner, and a mother and daughter from Japan. Just as well because the next song required audience participation. A mike was put in front of each of us at various stages to receit odd phrases from the song. Being of a rather introverted nature I did find this a little embarrassing at first but did my bit anyway.

I’m not sure if you could get other drinks besides the cherry drink we were given at the beginning. We didn’t see anyone serving drinks but that didn’t bother us. All in all I loved the quirky intimate nature of the cabaret and would recommend a visit to anyone wanting a taste of authentic Paris. We didn’t book but then we were there late September, out of season. I believe bookings are essential at other times. 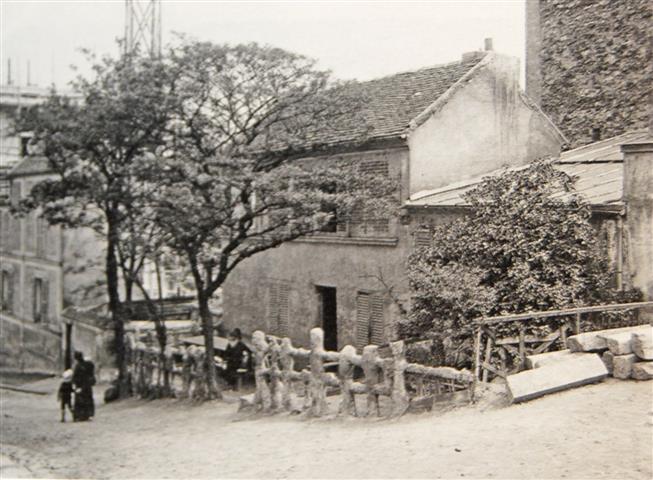 For further information here’s a link to the official website. http://www.au-lapin-agile.com